A mock government site designed to give political fanatics, not-so-fanatical-but-politically-knowledgeable, and politically interested people a place to learn about government and experience it firsthand (well, sort of).

You are not connected. Please login or register

BE IT ENACTED BY THE AMERICAN PROVISIONAL GOVERNMENT

Preamble: Whereas H.R.2 was passed and our military has begun to restore order to our nation, and our own military, along with our law enforcement officers, shall be able to deal with the current violence, and since we no longer need the help of the United Nations' Peacekeepers,
SECTION1: This bill may be called the, "American Sovereignty Act".
SECTION 2: The United States' Representative to the United Nations shall ask the United Nations to not send Peacekeepers to our nation. He shall show them how the violence is slowing and our forces are strong enough to bring back order and peace. However, he shall let the United Nations know that if the violence on our borders gets out of control, we shall ask for the aid of Peacekeepers.
SECTION 3: Smuggling drugs across the U.S.-Mexican border shall be considered treason against the United States and shall be punished accordingly. Aiding, or being a member of, the Mexican Drug Cartel, shall also be considered treason against the United States.
Sub-SECTION 1: The Military shall have the power to enforce this law.
Sub-SECTION 2: The Military shall have the power to bring criminals to trial at the proper Federal court who are suspected of or caught-
A) Smuggling drugs across the U.S.-Mexico border, or
B) Aiding or being a member of the Mexican Drug Cartel.
SECTION 4: Aiding or being a member of any anarchic organization, or any organization that violently defies the laws and sovereignty of the United States, shall be considered treason. The State Governors shall have the power to enforce this law and ask the Federal Military for assistance.
SECTION 5: All traffic between the U.S.-Mexican border shall be declared illegal. The punishment for crossing the border shall be:
Sub-SECTION 1: Instant deportment for the first offence,
Sub-SECTION 2: Fifteen years in Federal Prison for the subsequent offences.
SECTION 6: Thirty thousand military soldiers shall be sent to the U.S.-Mexican border in order to secure the border.
SECTION 7: All U.S. troops, including the Army, Navy, Marines, and Air Force, shall be evacuated from all foreign bases and posts. These bases shall be sold to the nations in which they reside. These soldiers shall be used to help quell the violence in our nation.
SECTION 8: With the money gained from the selling of foreign bases, a semi-private watchdog organization shall be set up. This organization shall:
Sub-SECTION 1: Investigate the corruption of government officials,
Sub-SECTION 2: Report their findings both to the Congress and to the State Governors.
The State Governors shall use these findings to convict and impeach these corrupt officials according to the laws of the several States.
SECTION 9: In order to discern the further needs of our military and how long the writ of Habeus Corpus needs to be suspended, two of our top Generals shall be called to speak before the House of Representatives and answer questions from Congressmen. They shall be called up three days after this bill is passed and shall remain in the House of Representatives until released by the House.
SECTION 10: This bill shall go into effect two days after passage. 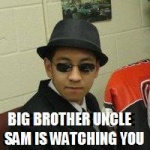 Posts : 211
Join date : 2012-05-18
Location : Temporal
Since the Senate reconvened, should we repass the Bill in the House, too, or would it be kinda pointless?

gmx0 wrote:Since the Senate reconvened, should we repass the Bill in the House, too, or would it be kinda pointless?

Well, we really have not the time to do so (since the Constitution is almost finished and we need to see how this will affect diplomacy and such before then). Otherwise, I would send it to the House.

Re: Clerk's Desk for Senate